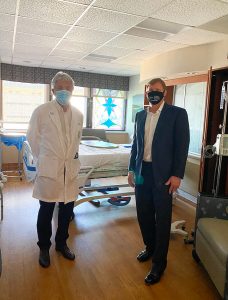 Jonathan Yob, founder and President of the Yob Family Foundation is a Tampa based entrepreneur and philanthropist with a passion for child welfare advocacy. Mr. Yob has volunteered in support of community causes for almost three decades. Starting in the early 1990’s, before computer ownership was prevalent, he donated thousands of computers to help bridge the digital divide. He has personally volunteered to assist numerous community causes including The Tampa General Hospital Auxiliary, Joshua House, Friend’s of Joshua House, Kids Charity of Tampa Bay, A Kid’s Place (ex officio), For the Family, Prevent Blindness Florida, Tampa General Hospital’s Palliative Care Unit, etc. Through the Yob Family Foundation, Yob’s efforts have assisted over 50 non profit organizations impacting thousands of lives. While much of the YFF efforts have centered primarily around the Tampa Bay Area, some of the YFF projects are national such as its relationship with the Grammy Museum, as well as projects in Africa to support orphaned children from the Rwanda genocide.

Jon Yob has built several successful businesses and has won a number of community, philanthropic and business awards including the Ernst and Young Entrepreneur of the Year, the Greater Tampa Leader of the Year, Miss Latina Philanthropist of the year, and many other prominent awards.

Mr. Yob’s efforts on behalf of children that suffer abuse and neglect are what he is most passionate about. In the late 1990’s, he visited several foster homes in Tampa and witnessed first hand not only the love and sacrifice of the foster parents, but also the conditions in which the foster kids lived. He also became keenly aware of the circumstances of children that were not fortunate to live in foster homes, but were wards of state run child shelters. He worked diligently to understand and improve the lives of children suffering through hardships that were no fault of their own. He served on the board of directors with the amazing child welfare advocate, Dottie Berger, on the Joshua House, Friend’s of Joshua House, Kids Charity of Tampa Bay, and A Kid’s Place (ex officio). As a founder, vice chair, and then chair of Kid’s Charity of Tampa Bay, Mr. Yob made the initial funding commitment toward the building of A Kid’s Place in Brandon, Florida. A Kid’s Place is a model of child welfare care built by Kids Charity of Tampa Bay during Mr. Yob’s tenure as Chairman. A Kid’s Place has to date served thousands of children.

Under Jonathan Yob’s leadership of the Yob Family Foundation, the foundation has made numerous lead financial contributions including its partnerships with Tampa General Hospital, the Florida Aquarium, ZooTampa, The Grammy Museum’s Music Revolution Project, as well as financially supporting countless other community causes. The YFF constantly seeks highly beneficial community causes that allow the foundation to leverage its resources for the betterment of our communities.